Welcome to the world of Direct String Synthesis™. The principal is simple: a focused feedback loop directed at a single string. This produces a powerful, infinite sustain, rich in harmonics for incredible guitar sounds. It's like amplifier feedback with greater control and predictability, at any volume, even through headphones. Play as fast as your left hand can scurry through a lick. Fade a string in from a motionless state for a reverse-tape effect. Run the EBow across the strings for gorgeous arpeggios.

Add distortion for a screaming guitar sound. This hand-held synthesizer provides an amazing variety of textures and tonal slurs – virtually an instrument in itself!

Playing the EBow directly over the pickup will increase your volume many fold and give you the crisp sound of super hot pickups. Moving away from the pickup gives you the mellow sound of a hollow body electric. This complete control over attack, decay and sustain, as well as a whole new range of tones and textures, makes the EBow one of the most expressive tools for the guitarist. The sounds you discover by experimenting with the EBow will amaze you. 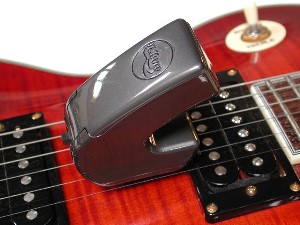 The Energy Bow is a handheld electronic bow for guitar. Called the EBow for short, it focuses a sympathetic oscillating magnetic field on a single string and causes it to vibrate. Like a violin bow, it can affect the string in many ways. Bowing, bouncing and wiggling it can shape the tone and character across the harmonic and dynamic range. From muted horns to shrill distorted leads, from flute to harmonica. It also acts like a pick, activating one string at a time for fluid arpeggios, percussive strumming and rapid trills (tremolandos and pedal tones). It takes some practice to learn the moves and discover the variables of this knobless hand-held device.

The wide range of tones and textures come from technique not presets. Where it is positioned along the strings, how it is moved, whether it is tilted to one side or up on one end, how quickly it is slapped into place all contribute to the sound. One key variable is its interplay with your pickup. The closer you bring the EBow to a magnetic pickup that is on, the louder and brighter the sound. This only happens very close to the pickup. This is called the playing area. You can vibrate the string anywhere along its length from the nut to the bridge, but the dramatic volume change occurs only very near a pickup that is on. Staying in this small playing area gives you lots of control over the tone and volume dynamics.

The EBow rides on two strings, straddling the one you're playing which is not touched by the EBow. Push the EBow against these support strings and the drive channel comes closer to the string that you're bowing intensifying the drive field for more string vibration. Less pressure or tilting the EBow away from the string decreases this drive.

Don't be afraid of the EBow. Slide it along the strings, tilt it, slap it into place over the pickup and see what happens. Try it over all your pickups to hear the difference in tone. We mostly play over the neck or rhythm pickup but not always. You'll have to press the EBow pretty hard against the strings when you're back near the bridge or it won't drive the string at all. When you hear something you like, try to repeat it. Then master it as a technique.

Play with your amp and guitar 'tone and volume' settings when using the EBow. Usually, you'll want to cut the highs and lower the volume but not always. Mostly you don't want the string to buzz against the EBow drive channel but sometimes you may even want that effect. You get the most control playing near the pickup but sometimes you might want a very clean natural string sound and you'll stay far from the pickup. You'll have to turn up the volume if you play away from the pickup and changing to another string will then be clanky if you don't muffle the support strings. There are no rules just techniques. You're sure to discover your own. It's been called the most revolutionary development in guitar technology since Leo Fender electrified the instrument in 1948. But we call it... just plain fun.

Check out this list of record cuts that feature the EBow, or sample the EBow sound.