How has the EBow changed over the years? 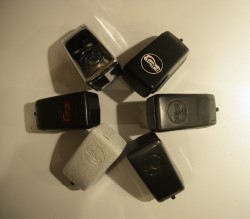 The EBow was introduced in 1976. The first model was chrome plated plastic and turned on and off automatically. The second model was black with a red logo. It had increased drive and an on/off switch. The third model was black with a white logo. It had an improved sensitivity for faster string activation. This fourth model is called the PlusEBow. It features the new harmonic mode and a cool blue LED. To get the slower activation and mellow sound of the original EBow, tilt the later models away from the strings. There are lots of playing tips in the Player's Guide.