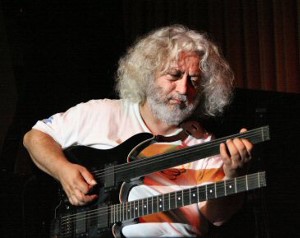 "Once, while waiting in traffic at a red light, Erkan, sitting at the steering wheel, took out a small home-made guitar-like instrument and proceeded to play a fast piece under his friend's astonished eyes. When the light turned green, as he drove on, he explained, half-laughing: "That's my traffic-light music." He couldn't think of spending that time without some strings and wood singing under his hands. After talking with him I appreciate the story even better." From Meet Erkan Ogur