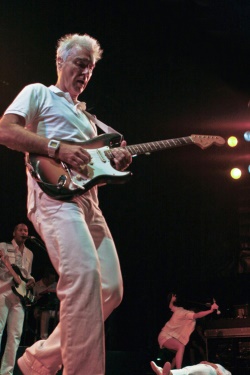 EBow on two cuts off a new album "Everything That Happens Will Happen Today" with Brian Eno.

Rhythm of life: Byrne solo still echoes Eno influence The musician also played more impressive electric guitar than he has in quite some time, churning out some entrancing E-bow drones in “Never Thought” and unleashing a particularly fiery solo in “Houses in Motion,” accompanied by his typically stiff-limbed and pseudo-spastic take on Chuck Berry’s famous duck walk.

Byrne burns down the house [David] Byrne rotated between his Fender Strat or Telecaster and acoustic guitar, showing himself a more supple (although still avuncularly awkward) dancer and more fearsome soloist (often using the intense buzz of an electromagnetic Ebow in place of a pick) than one might have guessed about the barking, twitching frontman of his youth.

Brian Eno and I recently finished our first collaboration in about 30 years. For the most part, Brian did the music and I wrote some tunes, words and sang. It's familiar but completely new as well. We're pretty excited. In August the music will be available via this Web site, free for streaming and it will also be available for purchase as both a download and in physical formats. One of the songs will be available free of charge.