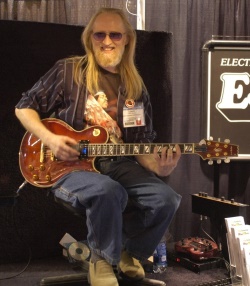 Lenny Walker has been playing EBow since 1978. A good friend and fellow band member, Joe Larson, loaned him his EBow to work on a classical piece he had written. Not that strange for progressive rock-and-rollers of the 60s and early 70s. A time when Yes, ELP and King Crimson were getting played on A.M. radio. Lenny joined the EBow team as a demonstrator in 1978. After demonstrating at NAMM shows for many years, we made him go to work in the factory to knock a little of that spunk out of him. We failed. A lot of what you hear on this website is Lenny's smooth EBow work. Have a look at the EBowTube page to learn from his thirty plus years of EBow experimentation.

The most expressive guitar synthesizer on the market.