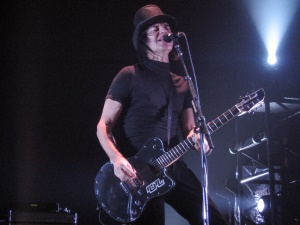 Bauhaus are a lovely foursome from Northampton, England, and are surely rock music's first official goth band. Bauhaus were formed in 1978 by singer Peter Murphy, guitarist Daniel Ash, bassist David J. and drummer Kevin Haskins and their name, as implied, was taken from the German Bauhaus movement. They had originally decided to call themselves Bauhaus 1919, but decided later to revert to the easier to remember name Bauhaus instead. David J. liked the name for its "stylistic implications and associations." Lily Eve